To get ready for #SNS15, we’re highlighting some of our great speakers! Today, we’re featuring a speaker from our Entertainment track. Meet Brian Diggelmann, Director of Digital Dank at SweetWater Brewing Company! 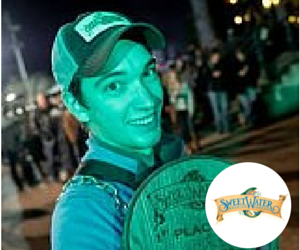 1. What’s the biggest thing attendees will learn from your panel, “Digital Marketing in Craft Beer?”

Marketing in beer isn’t all bubblegum and IPAs! We have to deal with demands from distributors, accounts and customers, plus regulation along the way. On top of all that, most breweries do not have the man-power to dedicate someone to digital media, which makes a strong, defined presence even more of a challenge.

2. Tons of people would be thrilled to have your job. How did you get into your field?

Mostly luck. Kidding aside, a combination of networking and being willing to take a risk. The opportunity was brought to my attention by a friend working at the agency SweetWater hired for a particular campaign. Even though the pay was a step down and they were probably looking for more of an entry-level candidate, I thought it was something I could come in, take over and grow into a larger role. Turns out I was right and now going to work doesn’t feel like “work” much.

3. What advice do you have for people trying to break into the beer industry?

Networking is invaluable in any industry, but even more so in beer where getting together for a drink is so much more common than powerpoints or conference calls. If you’re serious about working in beer, go to beer festivals, events and brewery tours and get to know the folks behind the bar. A lot of those things are staffed by volunteers, but it’s usually not hard to find a sales rep or brewer hanging out. Start building a relationship.

The other thing to understand is that you have to be ok with starting from the bottom. Our founder got his first job in beer washing kegs, and that’s still where plenty of our folks start. Don’t expect to jump right into brewing or sales if you’ve never worked in beer before.

4. Which SNS session (besides your own!) are you most excited about seeing and why?

I gotta say Private is the New Public. Kyle Brooks AKA Blackcattips is on that panel, and listening to that man talk is one of life’s greatest pleasures.

5. What trends in the Southern beer industry are you most excited about?

It’s an incredibly cool time to love beer and live in the south right now. Georgia recently changed its beer laws to allow folks to buy a limited quantity of beer at breweries to take home. We’ve also doubled the number of breweries just in Georgia in the last two years, a trend which is mirrored throughout the Southeast. There are tons of new beers to try and lots of innovation going on behind the scenes in how they’re being marketed to consumers.