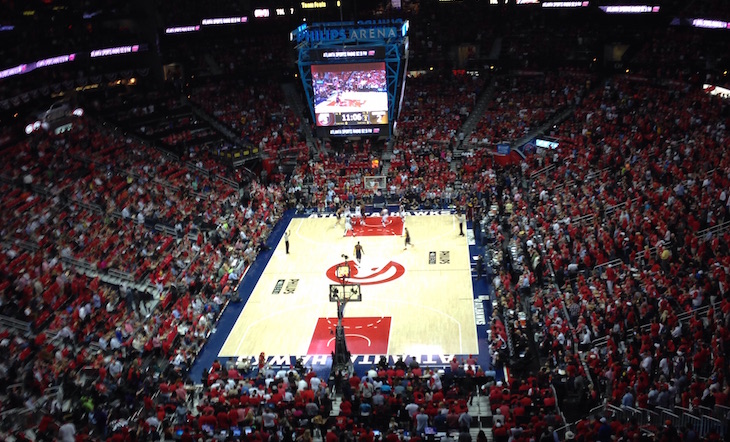 If you had told me last year that Atlanta would rally around the Hawks, the city’s pro basketball team, I would have laughed. Because if anything, this time last year, the Hawks were a joke.

According to a scathing April 2013 article in Sports Grid, the Hawks were the one team that appeared to be “egregiously tanking” in the 2013-14 NBA season. And while “tanking” might have been strong, the team was limping into the post season with a losing record and no hope of progressing very far – which they didn’t. The Hawks lost in the first round.

But Atlanta’s team had a much bigger problem. The Hawks belonged to a city of NBA fanatics… fanatics who could care less for their local team. Perhaps ESPN said it best: “Atlanta isn’t a lousy pro basketball town – it’s a lousy Hawks town.”

It appeared that Atlantans just didn’t care. It was an indifference not unique to last season, but spanning years.

And then there was the terrible start to the ‘14 – ‘15 season, when controlling owner Bruce Levenson put his stake of the team up for sale following a racist email, and general manager Danny Ferry was slammed for making a racial comment about Luol Deng, leading to his indefinite leave of absence. This season looked to be as dismal as the last, if not more so.

Enter: Steve Koonin, the man who saved Church’s Chicken from dropping Coca-Cola almost 30 years ago. The genius who brought “Very Funny” to life for TBS. And the CEO who would turn the floundering Hawks brand into the gem of Atlanta.

But, to give Koonin all the credit for Atlanta’s sudden passion for its team would be an insult to the players. The Hawks have made headlines left and right for their style of playing ball, which is as a team, versus as a one-man show – a credit to Coach Budenholzer. The team went on a 19-game winning streak in January and clinched the No. 1 seed in the Eastern Conference playoffs, only to come out of the first and second round victorious.

The Hawks, as a basketball team, are good. But it takes some marketing genius to pull the 180 that the brand made this year, and that genius can be credited to Koonin and his team.

First up on Koonin’s agenda? Honing in on the target audience. While Levenson et al. yearned to bring in the older generation of NBA fans, Koonin’s research pointed him elsewhere.

“The most predisposed to becoming Hawks fans were [the] millennial audience, which Atlanta has 2.1 million young people, and a diverse audience – African American, Asian, Hispanic,” says Koonin in an interview with Metro Atlanta Chamber.

Koonin recognized the core audience issue: Atlanta is a city made up of NBA fans who love the Knicks, Lakers, and other teams studded with superstars. They needed to convert these people into Hawks fans, and it couldn’t be done by targeting the 40-year-old businessmen in the suburbs who have grown up with these other teams.

It had to be done by going after their kids – Atlanta’s youth – and embracing the diversity of the city.

With a new audience in sight, the Hawks needed a desperate refresh.

Digital has changed the way we experience sports. We tweet at games, post pictures to Instagram using the hashtag of the evening, and send messages to our friends throughout the game. Even while watching at home, we keep the remote in one hand and our phones in the other.

As such, the way we approach sports marketing is changing as well. It’s so radically different that conferences (like SuperNova South) include entertainment tracks just to discuss the confluence of digital and entertainment and what this means going forward.

In short, it means that those who embrace the digital wave create unique, interactive experiences that fans love. Those who don’t become relics of the past.
And the Atlanta Hawks were a brand rooted in the past – in more ways than one.

So, the past is where they began.

During the 2014 playoffs, the Hawks unveiled a modernized version of their iconic “Pac Man” logo. It was to be their secondary logo, while the large Hawk gripping a basketball would remain the primary one. But in October, the new logo took its place as the center icon on a newly painted court. It can be seen on Twitter, Facebook, and t-shirts across Atlanta. According to Koonin, the “Pac Man” logo will take the place of primary logo. 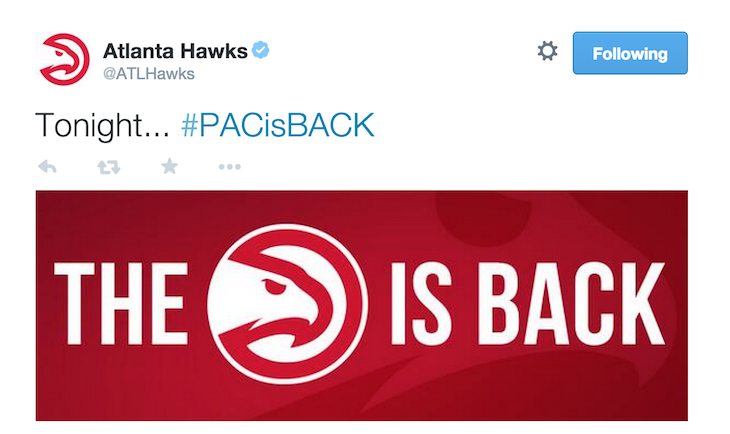 But actually getting people into seats required more than just a paint job and new logo. It called for a completely revamped Philips Arena experience. It required approaching the game as a form of entertainment.

So, Koonin aimed to make Hawks games an immersive experience from the time you enter to the time you leave. Each game now starts with a 3D court projection and is interspersed with cheerleading routines, dancers, acrobatics from high-flying basketball dunkers, and, of course, the actual game.

Yet perhaps most importantly, Koonin recognized that, in order to snag the younger generation, the Hawks needed to speak their language. And speak their language they do – The Hawks’ Twitter, @ATLHawks, has made headlines repeatedly throughout the season for its quick wit and creativity.

The Hawks are… well, cool. Between entertaining events such as Swipe Right Date Night as well as performances from T.I. and 2 Chainz, going to a Hawks game is fun – and even affordable, with 1,500 tickets selling at $15 apiece, no matter the game. The brand has fully embraced digital, and because of it, their new audience is engaged and supportive.

But it took a certain kind of thinking to elevate the brand in this way. In the ESPN article, Koonin hit on the fact that the traditional ways of marketing – with tons of ads and radio placements – wasn’t going to cut it. The Hawks aren’t selling a product… they’re selling an emotion.

It’s a sentiment I feel gets lost in marketing at times – it’s the belief that in order to get people to really buy into your brand, you have to make an authentic, emotional connection with them. Entertainment has changed. It’s no longer about passive experiences, but interactive ones in which fans can be actively engaged.

One year ago, Atlanta was a city that was indifferent to the Hawks. Today, the city is rallying around their team as they head into the Conference Finals. Koonin’s strategy worked—we’ve bought in. And not because the Hawks went on a 19-win streak, and not because we’re in the third round of the playoffs – although that certainly doesn’t hurt. But because being a Hawks fan no longer means repping a team that’s old and outdated.

It means playing team basketball instead of relying on a superstar. It means embracing the convergence of digital and entertainment. It means bettering Atlanta through outreach programs and being the first pro team in North America to appoint a chief diversity and inclusion officer.

And above all else, being a Hawks fan means being true to our city – #TruetoAtlanta.

Did you enjoy this post? Then sign up for our newsletter so you can stay up-to-date on all SNS 15 news!